In case u may or may not know I am heading back to Europe for the summer and will be having a little leaving party @ Solo and Sound.
Its on Monday 6 June starting off at Simon Solo and Bata,s super Monday night where i will spin an hour set then off to Sound club where i will hopefully be playing main room for an hour.
Pretty un official party so if u havent received this email everyone is welcome.

Dont worry i will be back by next high season.

One of the Biggest DJ’s to date to grace the turn tables at Bar Solo. A night not to be missed, If you have ever seen Krafty Kuts mix you know what I’m talking about – THIS WILL BE A HUGE PARTY!

Martin Reeves, AKA Krafty Kuts, is without doubt one of the worldâ€™s greatest DJs. Lauded in the UK, worshipped in Australia, acclaimed in America, where ever he plays he is guaranteed to cause a commotion with his riotous… skills.

So far in a glittering career he has gained dance musicâ€™s top accolades including Best International DJ at the Australian Dance Music Awards, Breakspollâ€™s Face of Breaks 2003 and Best Breaks DJ at the M8 Ibiza awards 2006, in only his first year as a resident on the white isle.

A stunning haul at Breakspoll 2007 saw him claiming Best Album for his debut long player â€˜Freakshowâ€™, Best DJ for a record third consecutive year and to cap it off, the richly deserved Outstanding Contribution to Breakbeat award that acknowledged his long journey to the acme of club culture.

From humble beginnings Krafty Kuts is now one of the big players on the worldâ€™s club scene, DJing alongside The Prodigy, Fatboy Slim and even the Rolling Stones. And with his recent Back To Mine and Against The Grain Re-Rubs CD raising the bar for DJ Mixes, combined with his continuing residencies around the world, it appears there is no end in sight to the meteoric rise of Krafty Kuts.

COME AND JOIN US FOR A TASTE OF IBIZA.

THIS SATURDAY WILL BE

IN TOUCH WITH IBIZA @ SOLO BAR

pls arrive early as will be road block 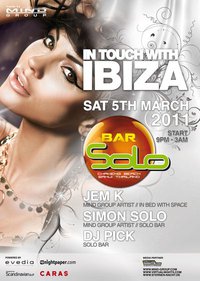