1 June, 2012 at 19:00 – 01:00
Emanuel Skinner [UB Radio, Boat Bar, Bed Supperclub] USA
G â€“ Rom [Zikomatik] France
Quadrro [Kissthesound, Dreamforce] Ukraine
Dennis Frost [Motoroom, Dreamforce] Russia
The main headliner of the festival for the first time in Southeast Asia is VINCENT VEGA
[Ministry of Sound, Skilled] Germany
Vincent Vega – became famous in the late ’90s thanks to his unique DJ sets to live with the elements of sound and so is the juicy, sexy, and the crowd Exciting sound of the most fashionable areas – electro-house.
All this – Vincent speaks about his passion for music and DJing – ultimately boils down to what kind of atmosphere on the dance floor, I line up, and what prevails in the hall of power. Put the track at the right time to catch the mood of the audience and bring it to the real ecstasy that’s my whole problem.
In 2000 his track Porn star not only conquered the dance charts MTV, was named the famous anthem of the festival Â«Love ParadeÂ», but also became a major hit all dance floors millennium.
“German Dance Award 2001” awarded to this track the first place in the category “Disco maniac” over 10,000 copies sold vinyl.
In 2005, Vincent Vega once again explodes the musical world of his new hit Don’t Stop.
He became the most recognizable tune of Ibiza and the title track on the compilation Ministry Of Sound – Clubbers Guide to Ibiza 2005.”
In recent years, Vincent Vega is constantly shuttle between Berlin, where he is a resident of several clubs, and St. Petersburg, where he awaits a charming Russian wife.
Ticket price: 600 baht
Mobile: 0873254226
For more information; http://www.facebook.com/events/243423392425049/ 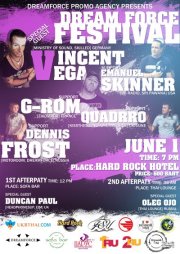