AG Productions & RETOX SESSIONS proudly presents Steve Aoki, a California based DJ & Producer is set to take over the DJ decks and bring his madness back to Bangkok crowd at LED nightclub on 31 May 2012.

Steve Aoki, a Superstar DJ and Producer, is the man behind Dim Mak Records, founded in 1996. Since founding the label, he has stepped into limelight and become one of the hotly sought-after DJ in the world. Having performed average 250 shows a year around the world, Aoki has never failed to impress the masses with his upbeat electronic/house sounds and the remixes of many artists like Michael Jackson, Jackson 5, Kanye West, Eminem, Lil Wayne, All American Rejects, Refused, The Killers, Lenny Kravitz, Bloc Party, Snoop Dogg, Kid Cudi, to name a few.

His label, Dim Mak has featured some of the most revered dance music producers in the industry such as in TiÃ«sto, Etienne De Crecy, Bloody Beetroots, Dada Life, Felix Cartal, Atari Teenage Riot and The Kills. It is also a house that producer quality artists such as Bloc Party, Klaxons, MSTRKRFT, The Kills, Pretty Girls Make Graves, The Von Bondies, and The Gossip whom had their career launched by Aoki.

In January 2008, he unveiled his debut mix album Pillowface and His Airplane Chronicles on Thrive Records. It featured tracks by Justice, Klaxons, Mystery Jets, Peaches, Datarock, Yelle, Franz Ferdinand, Bloc Party, and Scanners which most of them are remixed. This album reflects his renown of a tastemaking dance-party DJ.

Attesting to his global appeal, he has started touring with production via bus tours like the spring 2012 Deadmeat Tour, he headlined over 55 cities in 60 dates across the United States and Canada.

There will be an open bar from 9.30-10.30pm and any entry afterwards will receive one complimentary drink. 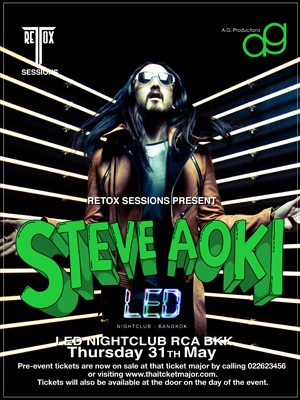 Boyonic have been already resident on the 2 main event of Koh Phangan: The Full Moon After Party at Backyard and at Half Moon Festival.
The ingenuity of Boyonic does not come without credit to a number of his main influences from all over the globe. That includes sensations, like: Hernan Cattaneo, Dousk, Chris Michali, D-Nox Beckers, Khainz, Eric Entrena, Save the robot, Umek, Anton Pieete and the local DJâ€™s such as DJ A and DJ Tripical labels. All that have motivated him further to master his unique orchestrated sound comprise of bedrock, vapourise, srpout, electribe, fresco kumquat tunes, flow vinyl, plastic park and many others.
Boyonic has embellished the decks of many clubs with loyal followers, who dig his style. He incorporates his originality with some tunes that often regarded by listeners to the like of Dousk, D-nox Beckers, Chris Micali and Umek from underground parties to after hours sessions at Barcode. He finally holds a claim to fame in one of the pioneer DJ to spin at one of the most insaine parties held in South-East Asia, the notorious: Full Moon Party!

The Party you’re all waiting for! Every Friday we’re celebrating our legendary GIRLSGONEWILD Party! Who hasn’t seen yet what’s going on at this Party shouldn’t miss it and come check it out this Friday, 24th February 2012!

10PM the Party starts, it’s going to be an unforgettable night again for sure! We don’t want to tell you more about it, come and enjoy the best female DJs in Thailand!