Brought to you by Bangkok Nightclub Network (BKKNN.COM)

SHANE KEHOE:
2011 was an excellent year for Shane Kehoe, as he’s been kept busy tearing the roofs off some of the best clubs in the world and ripping up dancefloors in all seven continents of the globe from Las Vagas to Hong Kong, Brazil to Berlin the list is endless! Things don’t look like they are slowing down either in 2012 with tours planned for South America, Middle East and Europe and warming up for the likes of Fat Boy Slim and Orbital all in pipeline. Irish born Shane Kehoe, now based out of London is one of Ministry of Sound’s longest standing official world tour DJ’s.

Djing since the mid-nineties he mastered his trade at a young age, wining many competitions/awards for his Djing including a runner-up in Muzik magazines industry renowned “BEDROOM BEDLAM” competition and winner of the “Raw Talent DJ” award in I-DJ magazine. Shane Kehoe has worked constantly to establish himself as an up and coming house DJ, already lifting his profile to DJ alongside the world finest DJ’s including Erick Morillo, Pete Tong, Afrojack, Mark Knight, Moby, Deep Dish, Antoine Clamaran, Tom Novy, Silicone Soul and Sander Kleinenberg. To say that he is always busy is an understatement as when he is not out performing he can be found in the studio working under various partnerships which have recently signed tracks to Housexy, Soulheat, and Gung Ho Recordings! Start to finish Shane Kehoe is the all round package from amazing technical ability behind the decks to unbelievable energy levels pumped out from the DJ booth. He is one major DJ talent who not only epitomizes the sound of Ministry but lives it too.

He will be supported by: Simon Solo (UK,TH) – Solo Bar, Samui.

FREE Entry before 11pm
300 THB after with 1 FREE Drink

DRINK PROMOTIONS will be listed soon. 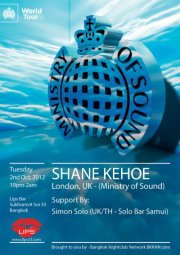 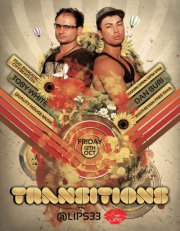