White Box is proud to invite to our 4th Anniversary. For this occasion we would like you to enjoy a fantastic and skillfull Dj for a great partying evening.

“Originally from the new generation HIP HOP scene and considered has one of the best HH Dj from his generation, Dj SNAKE is now offering an eclectic style of music to satisfy a larger crowd with his style and incrdeible mixing skills.

Considered the number one Pop Dj in Paris at the moment, Snake has successfully imposed his eclectic style on the scene. At only 25 years old, Dj SNAKE was called upon to produce LADY GAGA’s newest Album ( Born This Way ) which was released on May 23rd, 2011 and already sold more than 4 million copies in 2 months! 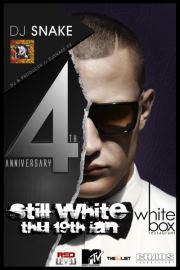