Back again for itsâ€™ fourth consecutive year with the most anticipated dance festival of the year, Culture ONE. It is the first outdoor dance music festival in Thailand that gathers dance music lovers and partygoers in one field of electronic vibe and created by CLUB CULTURE. This yearâ€™s event is taking place on February 26th, 2011 with five gigantic stages where each represents different genres from both local and international artists and djs.

The countryâ€™s biggest outdoor dance music festival start at 2 pm under the concept: ART AND MUSIC BECOME ONE = Culture ONE. Because we believe that every music note has itâ€™s own color and can be translate into art. Many artists both renown and new face such as Thun Puchpen, Tor Pakorn, MAMACUP711, MAMAFAKA, RUKKIT, TIKKYWOW will be interpretation this concept with no boundary on their ideas into 5 showcase zones and throughout the festival. Bamboo, the worldâ€™s renowned stage environmental designer from Ibiza who has created his masterpiece in many festivals worldwide flew into Bangkok for one month to design the stage for us. So you are all in for a special treat this year

CultureONE always bring the worldâ€™s top DJs and producers to Bangkok and this year on the Main Stage â€“ Culture ONE Arenaâ€™s headline is the award winning, multi-million selling British electronic collective â€˜FAITHLESSâ€™ (Sound System Live), an electronic band who plays Trip hop, House and Techno with Lead singer Maxi Jazz, Sister Bliss as DJ and producer, and Sudha Kheterpal on Percussion along with their producer Rollo. In addition there will be a â€˜POPSTARâ€™ show by Brian Cross and his PA, SORAYA from Spain who has work with DEFECTED IN THE HOUSE, ABOVE & BEYOND, ARMIN VAN BUUREN, BENNY BENASSI, LAIDBACK LUKE, MARCO V, MARKUS SCHULZ, ROGER SANCHEZ etc. If you like techno then we have MARCO BAILEY and his Detroit techno style in store for you as well. For House and Electro House Mark Wilkinson (UK) from Kidology London&Ibiza Republik and DJB straight from Zouk, Singapore is here.

Second Stage is a unique and sought after sound that is purely â€˜JOOF EDITIONâ€™ Arena â€“Progressive and Trance headlining this stage is John Askew (UK) and John OO Fleming (UK) along with Graham Gold (UK), ChrisKing, Fubsy*B(The Mansion)

Third Stage is â€˜DIGITAL SQUADâ€™ Arena â€“ Heavy Bass Trash Electro the craziest of all stage leading by G TRONIC (Belgium) from Dim Mak records of Steve Aoki, and his relentless approach to music making is sure to guarantee listeners and partiers alike a mouth-watering selection of monstrous tracks.Our local teams who will host this stage are La French Riot feat. Basscookerz – the extreme noise pollution, Laserface! Rec. and Dj Tay Remo.

Fifth Stage is â€˜RIOT PLAYGROUNDâ€™ Arena â€“ Pop, Rock, House and Electronica from Club Soma &Trasher the leading club night promoter and their guest Timmy Vegas (UK) who is the Dj and Producer from Soul Central.

This event will start at 2 pm till very late please be sure to come early and enjoy all the activities hosted by TOPMAN and many more. 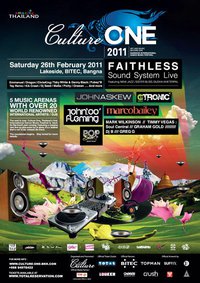 Bangkok Culture One 2011 at BITEC 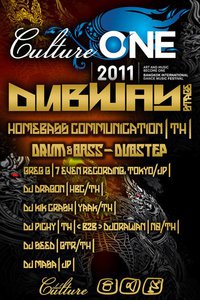 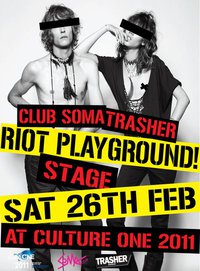