Retox Sessions Is proud to present an artist at the forefront of Belgiumâ€™s electro Scene. Gregory Grauwels Aka G-Tronic rise to the forefront of the electro scene. In 2007, in a place called Antwerp in Belgium, GTRONIC was born.

Over time, Greg, the master of this project, created a compulsive following in the depths of the electronic scene. Dark strains of rough crunching sounds in demonic natures, pooled with pulsating baselines, has driven GTRONIC to be one of the most prestigious characters in the present day music scene. The relentless and intriguing methodology used in creating his sound, has evolved into something unspeakable.

From a young age, Greg was enthused by the dark rough electro scene.
His focus on producing lead him to advance in establishing a music style, what we know now as Heavy Bass Trash. Since itâ€™s creation, GTRONIC boasts a number of original tracks, including the legendary Iron Man and Sucker Punch, along with a number of hard hitting remixes. GTRONIC has also collaborated with labels such as Steve Aokiâ€™s Dim Mak Records, Lektroluv Records, Ultra Records, TuffEmUP Records, OneLoveMusic/Sony BMG to name a few.

The success of his production career has provided GTRONIC with a global cult following, earning him devotees on every continent.

Without a doubt, for the last years Belgian titan GTRONIC has been at the forefront of this electro scene. Carving his name on the global stage with his unmistakeable and irrepressible sound, GTRONIC has established himself as one of the pioneering forces of the modern electro movement.
Warming up for Gtronic will be none other than 2 of Bangok Favorites: Superzaap and JSTDAFT Crews

Doors open at 9.30pm and Tickets are 650 Baht. We also will be offering an open vodka bar from 9.30-10.30pm. After the open bar period we will offer one complimentary drink with every ticket purchased. 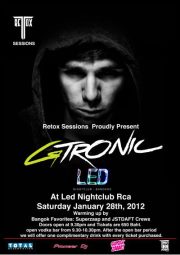 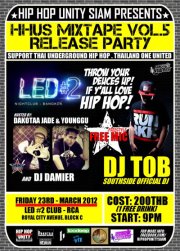