Tickets will go on sale starting from tomorrow, June 24, 2011, get yours now!

Loudness is celebrating 30 years of existence by touring around the world. They are currently performing all over America. On July 27, they will make a stop and play in one of the best city on Earth. Bangkok, here they come!

Created by: The Rock Pub – Bangkok`s House Of Rock 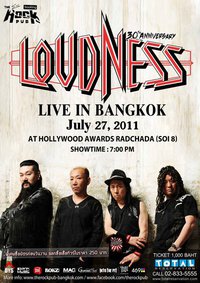