Watch out ladies and gentlemen we have Marc Macrowland @ Insomnia. We’re bringing the full on party set just for you!

Here’s a bit about him:

Marc MacRowland (MMR) started spinning records at the age of 16. His professional career started when he entered a DJ contest at the famous Nighttown in Rotterdam. The jury included Ferry Corsten and Michel de Hey. They decided he was the best of all the contestants. The price was to play at… the Fast Forward Dance Parade (the Dutch Loveparade, with 500.000 visitors). This was a great experience and the house DJ Marc MacRowland was born and ready for take off. Soon he got his first residency at club Ministry of Dance in Rotterdam. His career soon took off with gigs all over the Netherlands.

Besides being a very talented DJ, Marc MacRowland is also a very talented producer. â€™Marc MacRowland â€“ Peopleâ€˜ was released on Samsobeats, a big respected dancelabel of Sidney Samson and Gregor Salto and got massive support. After this first release new releases followed up quickly: ‘Black Bamboo’ got released on DJ Hardwellâ€™s label Slized (it has also been remixed by Hardwell). But the remix Marc MacRowland made of ‘Gregor Salto – Mas Que Nada’, together with his partner in crime Robbie Taylor was the summerhit of 2009. It was played by Erick Morillo during his Pacha nights in Ibiza and it was supported by al the big names in the industry. The remix for ‘DJ Chus â€“ The Feeling’ on Stereo Productions (Spain), which is one of the major recordlabels in the world, was a dream come true for Marc MacRowland. But after this he and Robbie Taylor also released their own track ‘Paseos’ on Stereo Productions and ‘Warehouse’ on Wazzup Records (Russia). This was followed up by a new original ‘State of Mind’ ft. Zawdi MC (incl remixes from Leroy Styles and Stefan Vilijn). â€˜State of Mindâ€™ was released on the worldfamous Sneakerz imprint. They also made a remix for ‘Muzzaik (Hungary) – Manduco’ and ‘Ruben Alvarez- Pachamama’ on Urbana Recordings from DJ David Penn!

Marc MacRowland is somebody whoâ€™s here to stay!! Keep him in mind, because you will hear a lot more from him, through his energetic sets or his great productionsâ€¦ 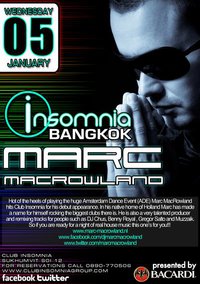