This season we kick our our residency nights on Wednesdays and Fridays. Phil Drummond and Jon Jak will be joined by guests throughout the season with a few surprises along the way.
Watch out for our beach parade girls for promotions and special offers.

Biog:
Heï‚’s represented some of the worlds biggest brands and events and headlined many of the worlds best clubs alongside the worlds premier DJs, playing in over 60 countries to date as a solo artists…

Behind the scene Phil has been a key figure in London clubland for the last 10 years working on various parties such as the huge UCL events with the likes of Calvin Harris, Mark Knight, Axwell, Sebastien Leger, Chris Lake, Zane Lowe, Dirty Vegas etc to some of the coolest underground house and techno parties such as Retox at Sosho with acts, BookaShade, Tiefschwarz, Luciano, M.A.N.D.Y etc, a night that was credited with changing the face of Sunday clubbing in the capital.

Fast-ï‚­â€forward to today and Phil has been instrumental in the evolving new scene in Asia. Now residing in Thailand for the last 12 months and using his extensive contacts built up over the years heï‚’s already managed to attract acts such as Roger Sanchez, Seb Fontaine, Layo and Bushwacka, Darren Emerson, Shapeshifters, Tiga, Sandy Rivera, Steve Mac, Funk Dï‚’Void etc to play alongside him and business partner Jon-ï‚­â€Jak with their own Luna Events brand.

Still touring extensively worldwide for his Ministry of Sound residency and guesting at Nikki Beach venues on a regular basis ensures our boy is as busy and as passionate about what he does as the day he started. 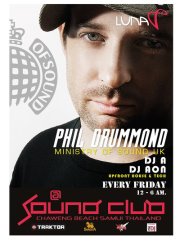 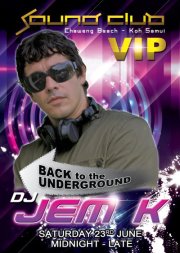