One of the sickest DJ / producers on the planet. This is a totally selfish booking that I have made as it’s my birthday. I think this alone speaks for itself!

ORAWAN will also be playing.

Looking forward to seeing all my friends & getting absolutely destroyed on this massively self indulgent night.

Big shout to all those who have helped UB grow over the last 4 years. You know who you are!! We feel extremely blessed that we are part of this scene & with your help and support; we’ll make it come alive to its full potential! If you’re yet to feel the energy of the underground scene. Then this event is a great opportunity to get involved! 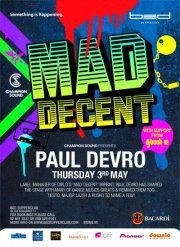