BANGKOK, Thailand â€” September 5th, 2006â€” Rio de Janeiro has its Carnival. Berlin has its Love Parade. Now get ready for the latest music festival on the international circuit â€“ â€œThe Bangkok International DJ Festivalâ€! Already known for bringing in an innumerable amount of top notch DJs, two of Bangkokâ€™s preeminent clubs are joining hands to create a week-long celebration of contemporary club music. This will be a welcome addition to the already hectic schedule of international acts that will be appearing at their venues over the course of the next year. From November 28th to December 4th a line-up of top international DJs will spin at these two pulsating establishments, cementing Sukhumvit Soi 11â€™s reputation as the entertainment heart of Bangkok, Thailand.

Never before in the history of Bangkok will so many big names in the world of clubbing come together under one umbrella. With people in Asia now savvy to what is hot and what is not, the roster will include major favourites as well as up-and-comers who are expected to tease the musical palates of local and international connoisseurs. Needless to say, this series of events will be the talk of the town. We are fully confident that clubbers will look forward to â€œThe Bangkok International DJ Festivalâ€ from year to year, with a major proportion of patrons flying in annually especially for it. In addition, part of the proceeds will be donated to Father Joeâ€™s Human Development Foundation (www.mercycentre.org), so the week of fun is also going to be for a good cause.

â€œThe Bangkok International DJ Festivalâ€ is expected to generate major press coverage both from overseas and local media, as Q Bar and BED SUPPERCLUB are already permanent fixtures on the regional party scene. The collective efforts of these establishments can only enhance their reputation and in effect enhance the reputation of Bangkokâ€™s nightlife as a whole. Some of the big names slated to appear include Louie Vega, Jamie Lewis, Bar Groovesâ€™ Matty Heillbronn and Ben Sowton, Kid Massive, Axwell, DJ Akbar Sami, Stephane Pompougnac, DJ Heather, DJ Premier, DJ Jazzy Jeff, Nic Fanciulli, Funk Agenda, Doc Scott – and letâ€™s not forget BED and Q Barâ€™s own resident DJs! You can find out more by checking out www.bkkdjfestival.com, as well as www.bedsupperclub.com and www.qbarbangkok.com.

Apart from the events in BED SUPPERCLUB and Q BAR, patrons will also get a chance to get acquainted to our sponsor hotel, Dream â€“ the epitome of Hautel Couture â€“ a brand new hotel where the action takes place after the clubs wind down. All festival DJs will be staying here and a VIP after-party will also be held at Dream for a selected few. In addition to Dream, this week long DJ-fest has already garnered a number of other high profile sponsors including premium spirits Chivas Regal and Absolut Vodka. Our current list of sponsors also includes BK Magazine, CD Warehouse and Moby Elite. More sponsors will be coming on board shortly. We look forward to this festival being a spectacular success. Join us as we raise the bar of the musical experience in Asiaâ€™s premier destination. 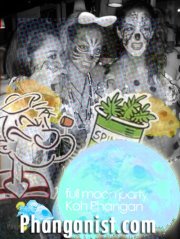